Honey has long been prized as one of the foods empowering us with the ability to live to 100.

Does it stand up to its claims?

Initially the famed Russian scientist, biologist and botanist Dr. Nicolai Tsitsin discovered pollen rich honey to be a life extender purely by accident. His aim was simply to send letters to 200 people in Russia all claiming to be over 100yrs old, hoping to discover their secrets.

His request was that they answer three simple questions.

What was their age?

How had they earn their living most of their lives?

What was their principal food?

Dr Tsitsin received 150 replies from his 200 letters. The answers were astounding, a large percentage of them were bee keepers and all of them without exception said that their principal food had always been honey!!

When the honey was analysed that these centenarians were eating what was even more interesting that it wasn't just honey, but the residue in the bottom of their honey was filled with pollen.

Pollen is after all the male gamete of all plant life on earth containing all the amino acids and thousands of enzymes. If you were to place a teaspoon of honey on a piece of bread and leave it you would find that the honey would start to digest the bread. Perhaps that is why so many people prefer to eat their toast with a little honey on it, it is an innate wisdom.

The man with the incurable red angry rash

When I worked at a health food store on the Gold Coast we had a gentleman come in one day with what I would believe to have been a vey bad infection on his arm, it was raw, itchy, very red and it looked angry, a rash that covered possibly half his arm. He had mentioned that he had taken several rounds of antibiotics but it was slowly becoming worse, nothing he did helped and it was causing him a great deal of stress.

The naturopath on duty asked if he would mind if she tried something?

She proceeded to put Manuka honey on his arm and covered it in a bandage, she asked him to return in a few days. When he returned she removed the bandage to which I witnessed it definitely did look slightly better, she then repeated the treatment and asked him to return in a week. Upon his return when she removed the bandage it was about 70% smaller, to which he yelled thats just amazing. It was indeed amazing and unless I had witnessed the whole thing would have never believed something so simple could have produced such incredibly results. Since he owned a video shop, he offered to give her free videos for life.

At the shop we had a honey supper who would bring us about eight 20kg barrels of honey every few months, I told him the story and he laughed saying, honestly Im not surprised, honey has the ability to copy either the DNA or RNA of certain virus strains, replicate them and then produce a super strain back on the original to kill it. Being the curious naturopath I was at the time I asked if he had any proof and he said yes tons of medical documentaries on the subject.

I then decided to look into this a little further, it turns out that honey has been used for a very long time and possibly since cave person days. Cave paintings from the Neolithic age show illustrations of honeycombs being gathered for food. Honey has been found in the tombs of ancient pyramids dating at least 3000yrs old, Greek philosophers touted it as the superfood containing the secret to eternal youth. It was well known that the original Olympic athletes would use it for extra energy and stamina. You will even find reference to the land of milk and honey in the bible referring to land of great fertility.

I decided to visit a museum in Italy to look into which sweeteners were used throughout early times, as the results kept coming up over and over again, honey. There were all sort of weird pots and vessels in the museum for storing and serving honey.

Honey has truly stood the test of time, unlike our new sweeteners. I remember watching a documentary discussing the evolution of the human species and them discussing that our ability for our brains to grow so fast separating us from the animal kingdom was only available upon our discovery of honey as a food source. Once we had found a calorie rich food which never spoilt and was easily transportable we could migrate over vast distances, and this carbohydrate loaded food enabled our brains to evolve.

It is thought that honey seems to be able to increase the power of the body's own immunological mechanism, stimulating and rejuvenating glandular activity and is also  a strong prebiotic for your 70 trillion gut flora.

It is also useful aid in increasing calcium retention in the body and a valuable food for those with anaemia and B12 deficiency.

Now before you rush off and have some honey, there are a few points.

It must be 100% raw, it must be relatively unfiltered so it still contains pollen, and ideally it must be sourced from Bees that are sourcing pollen from unsprayed flowers, so organic or come from somewhere that is isolated from our city contamination. I would recommend never to buy a common supermarket honey, which most of now has been linked to sugar syrups and coming from China. These are all heat treated and any valuable enzymes would have been destroyed.

This once rare superfood was hard to find but now can be picked up in most health food stores.

The next question you may be asking is how much?

Well imagine I gave you a spoon and told you if the more you ate the greater your chance of living to one hundred would be, how much could you get through? That is your answer, when natures provides a sweetener, it also provides you with a limit to how much you can stomach, you may get a few good spoons in but I would be surprised to see anyone consume a cup.

The new sweeteners do not create this same warning in us that has evolved over hundreds of thousands of years. The warning that when you eat a food in its natural state will trigger your body to alert you when you have had enough. Their aim is to make you eat more, that is why an average can of soft drink has 13 teaspoons of salt, to counter the extreme sweet taste. It is a trick used by all the giant of the food world, so read those labels.

At my retreat House on the Hill, I serve a home made ginger beer infused with honey and bee pollen, as well as adding it into my everyday cuisine. An old favourite of mine is a few teaspoons in a glass of water with a tablespoon of apple cider vinegar for a great nights sleep. 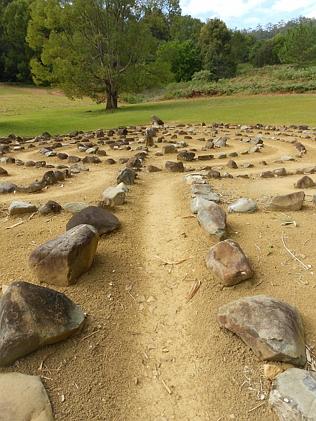 My name is Blair Harvey and I have had the pleasure of working at one of Australia's best Health Retreat's for the past fourteen wonderful years. Over those years I have had the delight of working with a spectacular kitchen team, we all have an immense passion for cooking good healthy food that is unique and tantalizing to your taste buds. Together we have not only developed our skills in cooking wholesome, nourishing and out right delicious foods, but we have been committed to broadening our knowledge of healing with whole foods and exploring the beauty of healthy living. Because of our enthusiasm in the benefits of foods and there healing properties I developed a blog to help us SHARE what we have learnt with the rest of the world.

You will find tasty gems of wisdom on health, food and healing, helping to expand your mind and revitalize your knowledge of healthy eating.